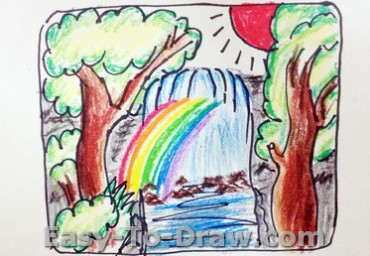 A waterfall is a place where water flows over a vertical drop in the course of a stream or river. Waterfalls also occur where meltwater drops over the edge of a tabular iceberg or ice shelf.

Waterfalls are commonly formed when a river is young. At these times the channel is often narrow and deep. When the river courses over resistant bedrock, erosion happens slowly, while downstream the erosion occurs more rapidly. As the watercourse increases its velocity at the edge of the waterfall, it plucks material from the riverbed. Whirlpools created in the turbulence as well as sand and stones carried by the watercourse increase the erosion capacity. This causes the waterfall to carve deeper into the bed and to recede upstream. Often over time, the waterfall will recede back to form a canyon or gorge downstream as it recedes upstream, and it will carve deeper into the ridge above it. The rate of retreat for a waterfall can be as high as one and half meters per year.

Here are the steps to draw Cartoon Waterfalls. Enjoy!

Step 1: Draw the rainbow in the middle of the paper. 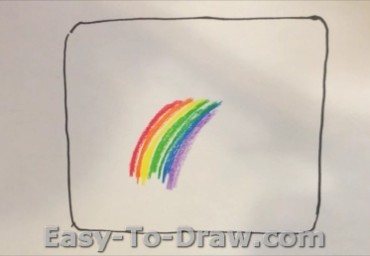 Step 2: Draw the shape of the waterfalls. 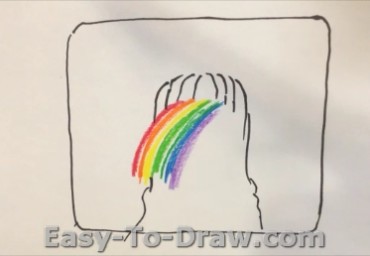 Step 3: Draw the river and the sun. 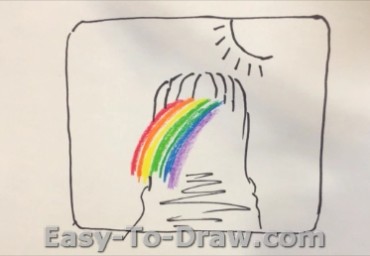 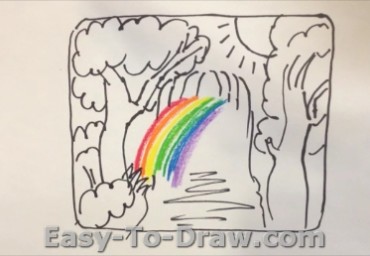 Step 5: Color the waterfalls and the river blue. 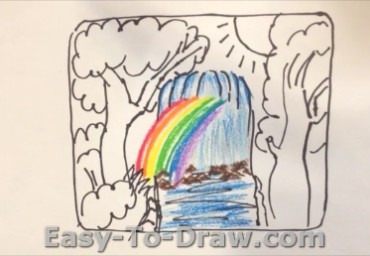 Step 6: Color the leaves of the trees green. 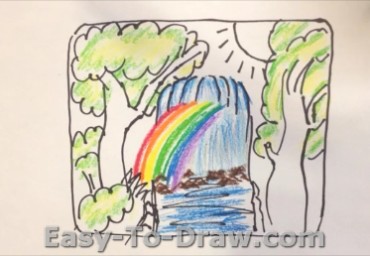 Step 7: Color the trunk brown, the sun red and the mountain grey.

Ho-Shing sat on a large boulder, looking down on the valley below. It was summer in China and the valley was full of orchards of trees, fields of grain and rows of vegetables growing rapidly in the warm sunshine. The mountains were also covered with leafy trees and the bamboo was growing taller and thicker with each sunrise.

“Ho-Shing! Where are you?” called Yong-Hu. He was in the bamboo nibbling on some tender leaves. “Ho-Shing?” he called again.

Ho-Shing heard his name. He stood up and walked towards the bamboo forest. “Yes, Yong-Hu. I hear you. What do you want?” he asked his friend.

“I want to go for a walk. My legs are cramped from sitting here too long. Will you go with me?” Yong-Hu asked.

“I would enjoy a walk. I heard what sounded like a waterfall on the other side of the forest. Let~ez_rsquo~s go and see it,” Ho-Shing suggested. “We can drink the water and refresh ourselves.”

The pandas trotted off in the direction of the waterfall. As they neared it, the sound of it cascading from high above was nearly deafening. The water landed in a deep pool and then flowed off into a river that meandered down the mountainside to the valley below. They walked up to the pool. Spray from the falls drenched their black and white fur. Ho-Shing drank some of the cool water. “It is very refreshing,” he said.

Yong-Hu drank some. “It does taste good.” He drank some more. Just then he noticed something bright orange in the water. “What~ez_rsquo~s that?” he asked.

Ho-Shing stood back and looked. “I think they are goldfish. How unusual to find them up here in the mountains. I~ez_rsquo~ve never heard of such a thing. Goldfish are found in fishponds.”

“This is a pond of some sort,” Yong-Hu said. He reached in with his paws and pulled a goldfish out. It wriggled about in his hands. “Look at its tail. It~ez_rsquo~s very big.” Yong-Hu put the fish back in the water and it swam quickly to the other side of the pool.

Ho-Shing looked up at the top of the waterfall. “See how the spray of the water is making it look like a rainbow?”

Yong-Hu looked up. “Oh, that is pretty. It is a rainbow. No wonder the goldfish want to live here.”

Ho-Shing stopped. He looked around. He saw several bats hanging upside down. He saw a rat running across the cave floor. “There~ez_rsquo~s nothing here. Let~ez_rsquo~s go back outside where it is sunny and warm.”

The pandas went back to the pool of water. “Let~ez_rsquo~s follow the river for a while and see where it goes,” Yong-Hu suggested.

“We know where it goes, but we can follow it for a while,” Ho-Shing agreed. They walked along its banks, passing trees and bushes, such as, chrysanthemum, jasmine and magnolias. They stopped to smell them all. Soon they came to a place where the river dropped straight down to the valley. It was another waterfall. “I think this is where we turn back,” Ho-Shing said. They stood for a while, looking at the water as it plunged over the edge. They walked back to the bamboo forest. The crickets began to chirp and a flock of cranes flew overhead on their way to the valley.

“I think summer in China is the most beautiful, don~ez_rsquo~t you?” Yong-Hu asked.

“I think every season is beautiful in China,” Ho-Shing said and began to nibble on the tender bamboo leaves all around him.