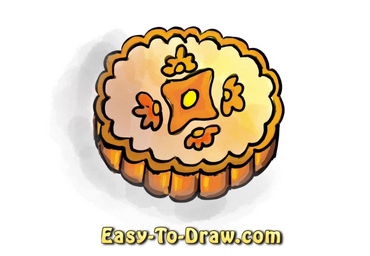 A mooncake is a Chinese bakery product traditionally eaten during the Mid-Autumn Festival. The festival is about lunar appreciation and Moon watching, and mooncakes are regarded as an indispensable delicacy. Mooncakes are offered between friends or on family gatherings while celebrating the festival. The Mid-Autumn Festival is one of the four most important Chinese festivals.
Typical mooncakes are round pastries, measuring about 10 cm (4 in) in diameter and 3–4 cm (1 1⁄4–1 1⁄2 in) thick, and are commonly eaten in the Southern and Northern Chinese regions. A rich thick filling usually made from red bean or lotus seed paste is surrounded by a thin, 2–3 mm (approximately 1/8th of an inch), crust and may contain yolks from salted duck eggs. Mooncakes are usually eaten in small wedges accompanied by tea. Today, it is customary for businessmen and families to present them to their clients or relatives as presents, helping to fuel a demand for high-end mooncakes. Due to China’s influence, mooncakes and Mid-Autumn Festival are also enjoyed and celebrated in other parts of Asia. Mooncakes have also appeared in western countries as a form of delicacy.

Here are the steps to draw Mooncake. Enjoy!

Step 1: Draw two flower shaped circle as the surface of the mooncake.

Step 2: Draw the height of the mooncake. 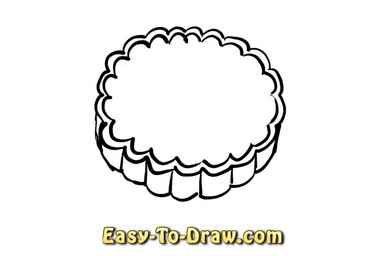 Step 3: Draw some flowers on top the mooncake. 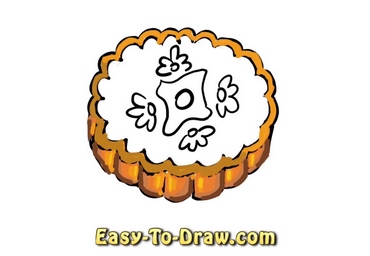 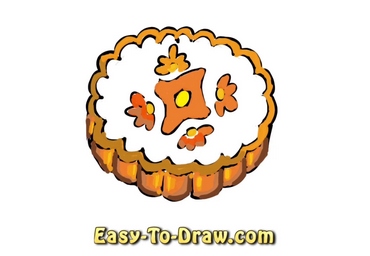 Step 6: Color the surface light yellow and draw a shadow behind the mookcake.

Aye, mooncake red bean in the bread roll
Thanks for the red envelopes
Aye, lotus seed filling with the egg yolk
And grandma got me a chain that’s golden yellow
Aye, mooncakes reminiscing on my past life
Mama in the kitchen cooking something pan fried
Daddy just came home from the restaurant
And it look like we got enough for another month