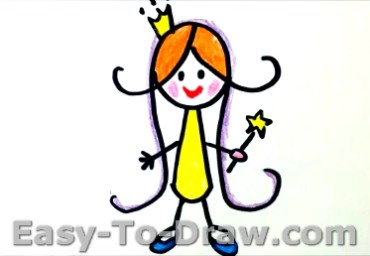 Princess is the feminine form of prince (from Latin princeps, meaning principal citizen). Most often, the term has been used for the consort of a prince or for the daughters of a king or sovereign prince. In European countries, a woman who marries a prince will almost always become a princess, but a man who marries a princess will almost never become a prince, unless specifically created so. From 1301 onward, the eldest sons of the Kings of England (and later Great Britain and the United Kingdom) have generally been created Prince of Wales and Earl of Chester, and their wives have been titled Princess of Wales.

Here are the steps to draw a cartoon princess. Enjoy!

Step 1: Draw a curve as the hair and an circle as the face. 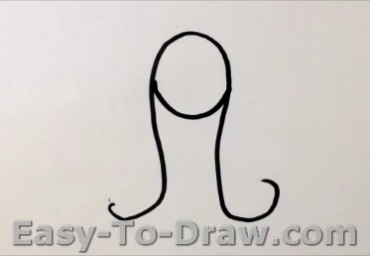 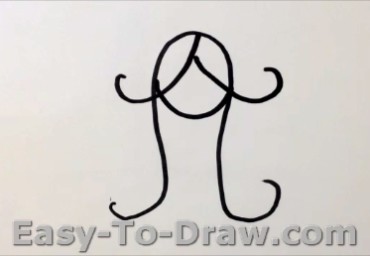 Step 3: Draw two spots as the eyes and a cone as the body. 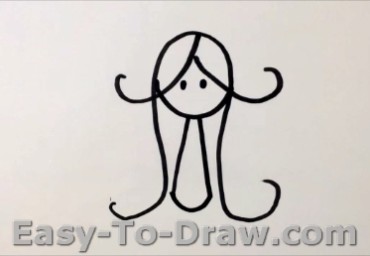 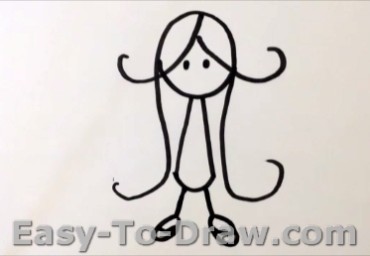 Step 5: Draw two hands and one of them holds a magic wand with a star. 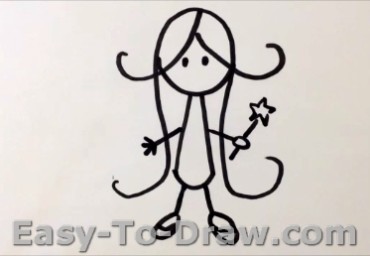 Step 6: Add an crown on the head and then color the prince.

A Short Story about Princess for Kids

Once upon a time there were three beautiful princesses. Their names were Kimmy, Katie, and Kristen. Kimmy was 3, Katie was 5, and Kristen was 8.

They all lived in a manor, with butlers, maids, cooks, and lots of people. But the princesses did not treat them like slaves, they treated them with respect and kindness.

The princess’s mothers name was Krystal. She was very kind, and taught her three girls how to treat all people with respect and kindness. The mother had long flowing black hair.

The princess’s fathers name was Kevin. He taught his three girls to be lady like. He had man like blond hair. He was very nice man.

They also had a tutor named ken. He had light brown hair. He was very handsome.

One sunny morning a messenger came with very sad news. The mother’s mother was very ill. The mother and father had to leave.

One time he told the cook to make steak and spaghetti. The uncle changed his mind but didn’t tell the cook. The cook could not read minds so he still made what the uncle said to cook. When the uncle saw this he stormed off. The cook was not happy. But Kristen told him it was ok, so that made the cook feel better. Everyone else ate what he made and it tasted delicious.

Another time the butler made the beds as usual, but when the uncle inspected them, he did not like what he saw and he blew up at the butler making him feel awful. Kristen saw this scene too. After the uncle left she told the butler it was fine. She made the butler feel better.

He did this to maids and lots of other people too. One day after dinner Kristen told her two little sisters about these scenes. The girls agreed to have a meeting in their tree house and discuss how to make there uncle learn a lesson to be respectful and kind to others just as they had been taught.

The girls made a plan to be very kind to there uncle hoping to teach him a valuable lesson.

First, while eating their breakfast they said to the cook, “Thank for our breakfast, this is a very nice meal.” As the uncle watches his niece’s polite behavior, he feels awkward that he has never said anything nice or polite to the cook.

Later on that day, the girls offered to help their very special butler with his chores. The Uncle sees this behavior and reacts with anger telling the girls to stay in their rooms for the rest of the day. He does not want the girls to do butlers job.

The angry uncle goes into the library to think about how he has behaved towards the butlers, the maids, the cooks and also his three sweet nieces who he made very sad.

After the uncle had time to think, he let the girls out of their rooms to have a talk with them.

“I have been acting silly these past few weeks. I have been yelling at cooks, maids and butlers. I have not been respectful to anyone in the manor. Watching the three of you be kind and polite to everyone, has taught me to be kind and caring to others as well. Thank you for teaching me this valuable lesson and I am very sorry I have not been so nice to you”

The girls thank their uncle and are happy that they taught him the lesson of respect, kindness, and love.

The next day a messenger came and reported that the mother and father would be arriving home within the next few days and that their grandmother was feeling much better.

The uncle was on his best behavior for the rest of his stay with the girls.

The mother and father never found out about their uncles bad behavior. The girls kept this a secret. A secret they only told to their children, and their children’s children. And this lesson was passed down to many, many more.